An ambulance of desires. Can you briefly introduce what this project is? yours Website I read that this idea originated in Holland in 2007.
Yes, the idea of ​​an ambulance originated in Holland in 2007. It was founded by Kees Veldbohr, who drove an ambulance and took an old man, I don’t know if he went to the hospital or home because he was dying. The man who was a sailor wanted to see the sea one last time. Keyes “yielded” to his request and allowed the patient to board the boat.

The ship is now named after their mascot, the teddy bear. That’s where the idea of ​​buying an old ambulance arose. Now Holland even has a law on ambulance wishes. There are about eight institutions among them and there are organizations that fulfill people’s wishes. They actually go out every day – someone calls them and they go in an hour.

How did you find out about the program?
I met him in Israel and he impressed me. I started to learn more about it and then I approached a Dutch organization who wrote to me about what they were doing. We started communicating and went there for training.

We were there a month ago. They explained everything to us and told us how it works. They took us to fulfill with a woman and we saw how it really works. Then, three days later, they wrote to us that we could come in an ambulance.

So the ambulance came from the Netherlands?
We have an ambulance directly from a Dutch company.

Is there anything special about her?
The ambulance is made of glass, which is not common in the Czech Republic. A Dutch ambulance has been modified so that the patient can see outside.

It has an electric stretcher, has the organization’s logo on it, and is dressed in blue clothes that don’t look like a hospital, so the client doesn’t even feel like they’re in a hospital.

Why did you decide to launch Amintka Vráška in the Czech Republic?
When I was young, I was very sick. Even as an adult, I was treated in many hospitals. Staying in the hospital for a long time is not very pleasant. It breaks a person mentally. You really give a person, I don’t want to say hope, but it really makes them forget for a while that they’re dying or seriously ill. In addition, they will spend memorable moments with their families. You are only fulfilling people’s wishes.

Who can use an ambulance? You mention on the website that it is a chronic disease for immobile patients. Can someone else who is seriously ill approach you?
For example, we agreed that if it was a sick young child with cancer, we could take him on a trip. Let’s do this too. If there are people who are bedridden for a long time, we can make such an exception.

When will the service start in the Czech Republic?
We count from February 1, 2023. Maybe earlier than that. We set a date in February to get everything ready.

Will there be a paramedic or someone to attend to the patient in the ambulance?
An ambulance driver and a nurse will be present. Often we have ARO nurses or a paramedic. But we also have a doctor in our group. It mostly depends on the condition of the client.

Do you have a contract with the Ministry of Health? Or how will you pay for the project?
We keep all donations from our partners and small contributors. The customer pays nothing. Let me give you an example: If a customer wants to watch football, they also come to us for tickets. Complete it to pay the company.

Can the patient’s family also go willingly?
We expect someone from the family to come. We take a relative to the ambulance. The rest can follow us in the car.

Can you elaborate a bit more on how this all works in practice?
There will be a special form on the website that will be filled by interested parties. Accordingly, we find out whether the customer is suitable for the service or not. If so, we will contact him and discuss the details. We will discuss with our healthcare professionals whether the client can drive. We will also discuss this with the client’s doctor.

An ambulance then takes the client with a family member. He would drive to a place, for example, to football. We move the client on the stretcher to a position where he can see better. After the match, we’ll pick it up again. 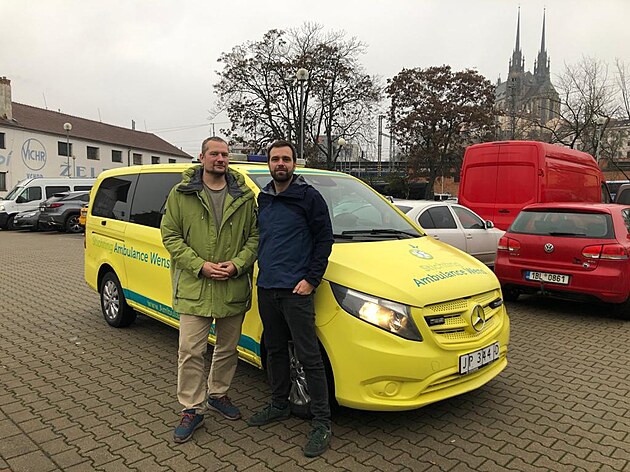 In the Czech Republic, patient travel can be viewed from February 1. | Photo: Love Ambulance

They want to attend their grandchild’s wedding

What can people keep?
There are different desires. One wants to visit one’s birth house. Then Grandma and Grandpa are seriously ill and want to see each other before they die so we can drive them from one facility to another.

Perhaps they want to attend a grandchild’s wedding or graduation. In Holland they go to sea a lot, which we don’t have. This could be a variety of options, for example a trip to Charles Bridge or the zoo.

Already have a custom request?
Yes, many people have already contacted us. But we talked about starting in February. But they’re not terminally ill, they’re immobile and tied to artificial lung ventilation at home.

Where does an ambulance work?
We will depart from Nimberg and Brno. The ambulance alternately stays in Nimberg and for a while in Brno. But we will operate throughout the Czech Republic. We would definitely like another ambulance, but it’s about money.